Hitler in Landsberg Prison after the „Beer Hall Putsch“

Adolf Hitler in Landsberg. On the backstory of the Third Reich.

It created quite a stir in the world of historical research when Behringer’s in Fürth (Bavaria) offered the following objects for auction: “Historicum: More than 500 paper objects from Hitler’s detention in Landsberg, among them letters to Hitler in Landsberg, a list of all visitors, a large number of visitor’s cards. The original record book of the Landsberg prison containing Hitler’s entry. These records from the “fortress” prison Landsberg am Lech on Hitler’s imprisonment in 1924 have been considered lost since the 1950s.”

After the failed coup in Munich Hitler was arrested on 11th November 1923 and waited in Landsberg prison for his trial, in which he was convicted to five years Festungshaft (fortress confinement). Owing to the rather benevolent Bavarian state government Hitler believed he would be released on probation after only half a year. During the first months of his imprisonment there was a stream of visitors coming to Landsberg which only ceased on Hitler’s order in June 1924. During this time Hitler was busy writing the first part of Mein Kampf.

The head of the Staatsarchiv Nürnberg (Bavarian State Archive located in Nuremberg) Professor Peter Fleischmann has now presented a comprehensively annotated edition of the documents on Hitler’s confinement. A particular focus is placed on the more or less well-known visitors such as Amann, Esser, Ludendorff, Rosenberg, Röhm, Streicher, Helene Bechstein, Elsa Bruckmann or Angela Raubal. Hitler received more than 330 visitors during the course of two years.

This edition clearly shows the living condition of Hitler and is associates during their imprisonment. Several other prominent Nazis were detained in Landsberg at the time: Rudolf Hess, later Hitler’s deputy; Herrmann Kriebel of the Kampfbund, who later on worked for the Völkischer Beobachter (the Nazi party’s newspaper); Friedrich Weber, leader of the Bund Oberland, who should not be confused with Christian Weber portrayed in Herbert Rosendorf’s novel Nacht der Amazonen. 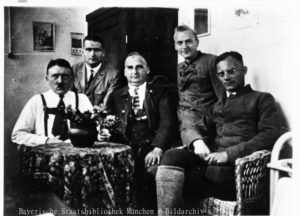 The book also explains which deformity gave rise to many legends about Hitler, the background of an order for a very representative Benz automobile (Hitler’s Mercedes) and why Hitler was only released on 20th December 1924.

After receiving his PhD from the University of Erlangen-Nuremberg, Professor Peter Fleischmann trained as an archivist in Munich. He worked at the Staatsarchiv Nürnberg from 1987 to 2000, when he became head of the Staatsarchiv Augsburg. In 2007 he qualified for professor at the University of Augsburg and became head of the Staatsarchiv München in 2010. In 2012 he returned to the Staatsarchiv Nürnberg as its new head. Since 2015 he also teaches as a professor at the FAU in Erlangen. He has published widely on topics such as social, economic, constitutional and cultural history of Bavaria, the history of historical cartography and archive management.